A comeback after break always carries a good feeling. Here is a short tale from my recent travel experience. Yet another bag packing travel story from Southern tip of India. After two day trip to Kochi (I am yet to write about it), little did I know what was in store at Karaikudi, where I was supposed to have a business meeting. These sudden meetings have been slightly arduous yet full of surprises.

At the centre of Kanadukathan 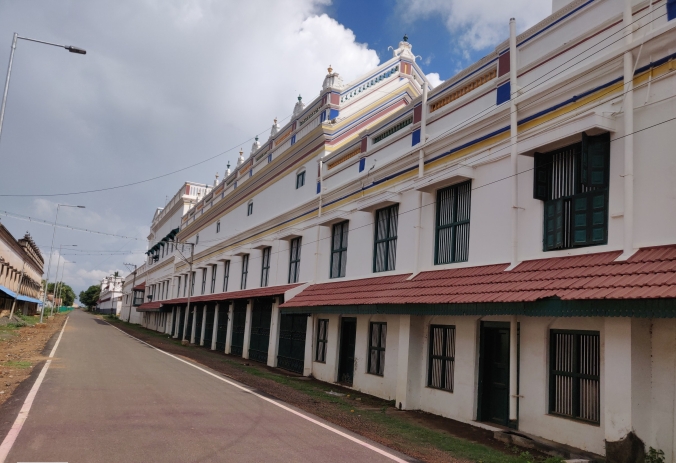 Since I sometimes end up overthinking, that provokes anxiety only to later result in overwhelming experience or a fruitful event or travel. Chettinad experience was one such travel, which I thought was purely professional. Alighting train at Madurai and travelling by road was a better option rather to have multiple break journeys in train. With luggage more than usual and sweat tripping, I was only waiting to rush to my accommodation and have a quick shower to cleanse body and mind.

Silence to the core mid-day

This is one another time, I booked a hostel. Chettinad Packers, did have good reviews and true to the fact, the very slight impressed me. Reaching this place, which was a little away was held an unplanned surprise to self. Though usually I check the destination and hotel, sometimes, I am drawn to other factors in accommodations. Just about 5 minutes from the hostel was this magnificent building that seemed very familiar. It took less than a minute for me realize that this mansion was home to either villans or hero in Tamil movies. Remember seeing them in one of the travel stories in YouTube. This was for sure a part of my passive bucket list.

I was very pleased with the room for it was spic and span, taking care of basic needs. The manager(Akash) also managed to help me with a bike taking into account my urgent requirement to attend meeting. While speeding in the smooth roads, I realized that this quaint village for sure did not have the word “traffic” in it’s dictionary. How peaceful can riding be…..while I was trying to sway until my destination arrived. 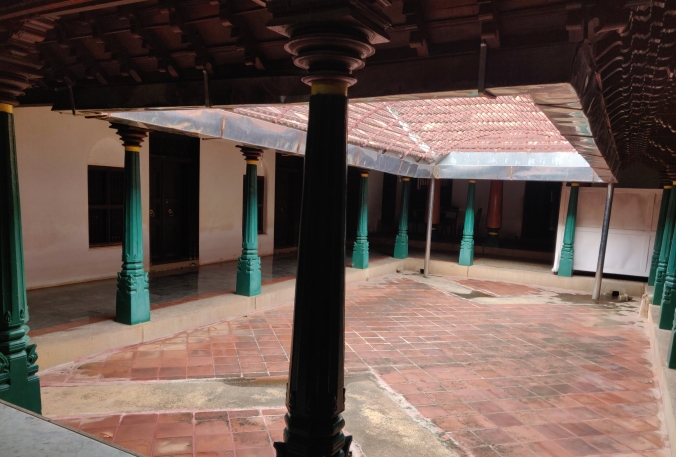 Though, I did get lost in a deserted path for about 5 kilometers…a big thank you to google maps…not a soul all through the uneven patch……it was perfect offroading experience…before connecting the high way. Nevertheless, my return was careful and smoother.

Lunch time, all thoughts got drawn to chettinad cuisine…. specially mutton the traditional way. I chose meal over biryani. After a hearty meal, Akash accompanied me to one of the Chettiar’s palace and showed me around. There is nominal charge of Rs.50/- and receipt is given for the same. These funds collected go to the caretakers expenses.

As I entered the mansion, I see a long rectangular hallway with two major entrances and I was warned not to take photographs since the owner is not keen on this place being posted on social media. For sure the hall was a place to be shot, as it had an array of long standing cupboards with mirrors, tall pillars, corridors and impeccable architecture.

Proceeding further, we were greeted by the caretaker, who had a welcoming smile on her face. This where my photo shoot started…..the next room was a hall with broad seating both sides edged by long pillars made of single wood along with a open roof courtyard at the center. One can walk through both side to reach the wash area and then to kitchen. It was massive, more than what one could imagine by just looking at the house from its main entrance.

There were few bedrooms at the ground floor, yet most of them were at the first floor. I learnt there were more than 40 bedrooms in the mansion. They were all locked and I could barely get a sight of it. The dark and narrow staircase alongside Yellow painted walls led us to the roof of the building to give the best view of the quaint town. It was a u-turn to history.

Hope you enjoyed reading this piece of hidden history. To be back soon…Luv Vannie

It was pre-decided to make the following day peaceful. As part of the plan, we woke a little late and headed straight to the beach for a morning walk (I am an early riser). Damn that morning, a serene atmosphere and I just wanted to lay at the beach that did have less than 20 people other than the fishing community that was ready to go sailing. The waves kissed my feet a hundered times whilst I stood gazing far beyond where the sky and sea touched. Well, this is what I call “A moment in life time”. 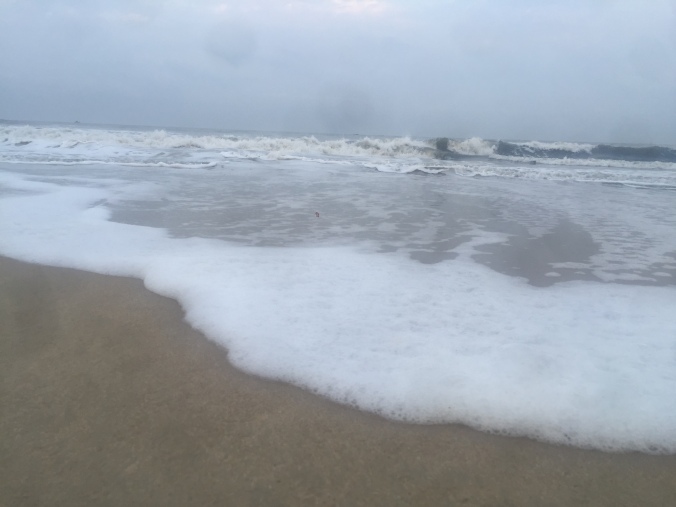 Once back, after morning breakfast we hired a bike and to explore nearby places. Though, I was keen on getting a Thunder Bird, I ended up with an Avenger. Visitors usually flock to Northern part of Goa, nevertheless South Goa too had lots of attractions and we had many suggestions pouring in. But with two kids, plan was made keeping their choices in mind. The me..first went to seeking blessing and where….to temple. My father’s reaction was, to temple in Goa; Usually people head to churches that speak of its fame. He then did affirm, that I was unlike others 🙂

Why I chose temples over churches? Well, in my research, blogs or tourist information were filled with information famous churches, be it Jesus Basilica or Lady of Immaculate Conception. I have read, seen and heard over and over again. It was my chance to bring in something beyond churches. While I did my search there were handful of temples that were famous but not as of those churches and zeroed on a couple of them. The one that attracted me the most was the Shanta Durga Temple. My personal recommendation for “Temple Lovers”. 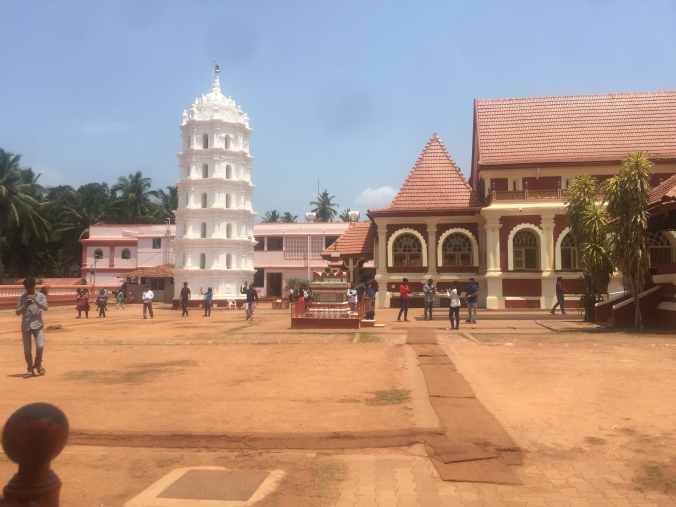 We attended the pooja that went on until noon.  The premises had a small underground canteen where meals was being served, probably at a nominal price but chose to look for options outside due to large crowd in waiting to dine at the temple. Since there were fewer options and google was a bit slow due to connectivity issue, I kept asking for people for descent vegetarian joint. After making a couple for circles in the same area, the restaurant or hotel was located, a house that had its front yard converted to mini restaurant with about 5-6 tables serving fresh food. Undoubtedly, I had one of the best local dishes. The ripe mango curry was my favorite, for, its my first time.

After fulfilling my taste-bud, I headed towards Panjim, via Madgoan. At Madgoan, we halted by local market to make some purchses. Fishes everywhere and prawn were so damn cheap @ 100/- , which I would end up paying 400/- in Bangalore. We got a couple of variety for the next two days before heading to our next point, that was about 30 kms.

The road was wide, mostly connecting the highway yet, with less traffic. As we saw the surge in moving vehicle, I knew we were closer to Panjim. I quite liked the view of Panjim port, for the huge steel vessels were not a common scene for someone living in landlocked city. Unfortunately, since we were on the other side, I was a little hesitant to cross over with two kids wanting to run behind wherever I stop. Though I was keen on more photographs on my way back, it didn’t really happen.

Just before we reached the popular beach, I fell off my bike along with my little one, something not very nice that I wish to remember. Flashback–while I stood at a crossing , relatively smaller one with hardly 20 vehicles from all sides, for other vehicle to cross and next moment lying down with the bike over me and my little one. Thankfully, it was a lighter vehicle, nor was I speeding and crowed was slow moving. Neel crying for about 30 mins is still echoing….Despite no fault of mine, I did not forgive myself for his pain. I guess it could have been a blink of  my eyes. With bruised feet and hand, broken mirror and footrest of the vehicle, I managed rest of my journey with pain, yet with determination. My parents were shocked and were in pain too. No sooner we got to the beach and an ice-cream was able to bring back Neel to normal while not allowing him to concentrate on the wound. 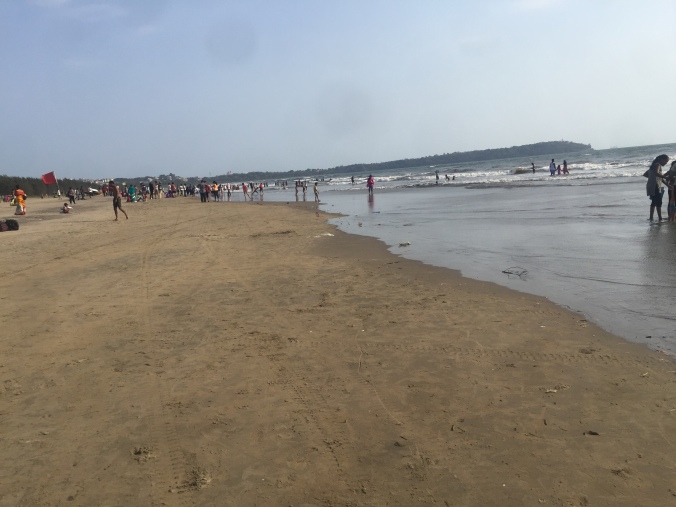 As sun was setting, and visibility turning poor, I decided to wind up not spending much time. It was a long 45 plus kilometers to the resort. The ride was careful.

Next day was meant only to relax, while kids spent hours in the pool, I was busy making a couple of variety of sea food dishes. The whole mood of sickness to mind and body was balanced.

The following day, I decided to explore Benaulim that was very close to my  resort. I woke Neel early, while Reshu decided to stay back with parents. A much smaller and a bit of sleepy town, that housed Taj Hotel facing the beach, also had a cleaner stretch with water activities morning was catchy with majority crowd from nearby resorts. We then headed to Rogers Beach shack for an English breakfast, while watching local and foreign tourist float and relax.

Morning at the beach shack

Spending two hours gaping at the sea, while Neel was hoping, running, jumping and playing in the sand was a memory I will hold close to my heart.

Awaiting my next Goan trip, hoping to explore the famous churches and much spoken backwaters………

Its yet another newer year that just commenced. The very thought brings freshness to mind and gears up to do wonders by being keyed up in our very own acts. A positive outset indeed. In general, vacation mode has relatively ended and advanced towards the work mode with a dash of adrenaline rush to be able to do little wonders. Let us all conserve the good acts, whilst letting go all that had to, with learning that came by.

Wishing all my wonderful readers A Jubilant and Vivacious New Year!!!!

An undisturbed Sunday morning after ceaseless shower that nearly brought Bangalore to halt. This was throughout the week, an effect of weather all around the globe. Sun is not fully up there but have ensured to throw ample light for the day to begin. Perched on my couch feeling cosy with my cup of tea, browsing through regular pages and pictures, I found this photograph captured at Goa.

I fell for English breakfast almost a decade ago and my love for it is still on. I treated myself with this breakfast at Goa one early morning in May (Post to follow). A weekend visitor can sometimes get lucky to pamper their taste buds with my breakfast of this kind at home and have additional boiled veggies with a couple of variety of fruits. Whats your breakfast favorite?

Have a lovely Sunday!!!

What is freedom to us?

Well, each one has a different perspective depending on situations. Yet, the understanding drills down to the fact that one in enjoying the good or bad, without actually measuring. I look up to these tiny Fishes that keeps swimming to entertain, knowing no threat from their world outside. Do I really call this freedom? May be..in a sense it is peace within……. 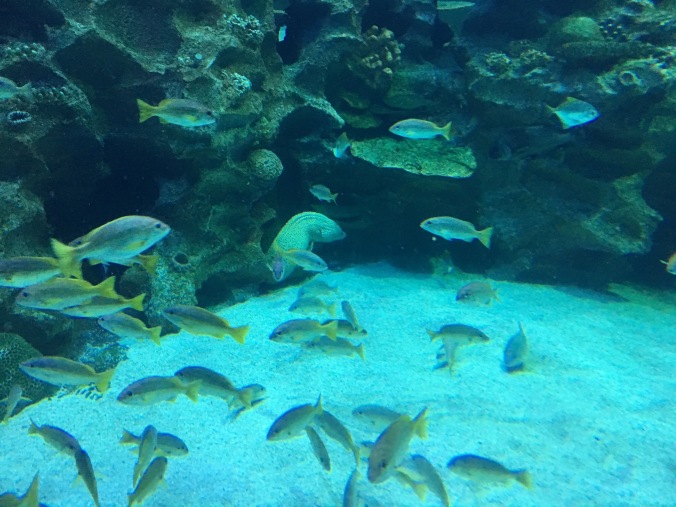